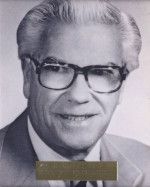 Dr. Utgaard, founder and director of the International Music Camp at Bottineau, ND, is well known throughout the United States and Canada as a music educator, adjudicator, and conductor. He has served as full time director of the International Music Camp European Tour Bands. Dr. Utgaard has received numerous citations including being selected as one of the "Ten Most Outstanding Music Directors in the United States and Canada" for 1976. He has also served as director of bands at the University of South Dakota, Ball State University, Northern Illinois University and visiting lecturer at Brandon University in Manitoba.